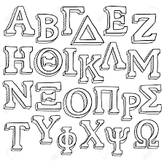 The Greek Alphabet
> Greek is one of the official languages of the European Union.
> It is the official language of Greece with approximately 12,000,000 speakers and one of the two official languages of Cyprus with approximately 700,000 speakers. It is also spoken around the world by a significant number of Greeks of the diaspora.
> It is an independent branch of the Indo-European language family.​
> It has a long and well-documented history spanning 34 centuries.
> The earliest written evidence is found in the Linear B clay tablets (c.1400 BC) in the region of Knossos, Crete, making Greek one of the world's oldest recorded living languages.
> Greek was a widely spoken lingua franca in the Mediterranean world and beyond during Classical Antiquity, and would eventually become the official parlance of the Byzantine Empire.
> It is broadly divided into the following periods:
- Proto-Greek
- Mycenaean Greek
- Ancient Greek
- Koine Greek (also known as Hellenistic, Alexandrian or New Testament Greek)
- Byzantine Greek
- Modern Greek
> Modern Greek can be easily traced back to the ancient Greek language in the form of the letters, word roots, and structure. It has been calculated that Greeks today use in their everyday language 2,500 Homeric words.​
I remember my exultation while standing on the Mediterranean shore at learning from my pocket dictionary that the modern word for "wave" is "to kuma", the same as in Homer; my delight in seeing little children able to make puns on the ancient inscription at the Oracle at Delphi; and the awe and wonder at studying Linear B and finding the same words I had heard so often on the bus or at the vegetable market.
​(Saxey, R. (n.d.). The Greek Language Through Time)
> Greek has been written in the Greek alphabet since approximately the 9th century BC. The old Mycenaean alphabet was substituted by the Phoenician alphabet with certain modifications and the addition of new letters.
> Greek is used in the process of new word production in modern languages.
​> A large number of Greek words has found its way into European languages in the fields of medicine, athletics, physics, astronomy, geography, philosophy, chemistry, geometry, geology, politics, theology, linguistics, the arts and sciences.